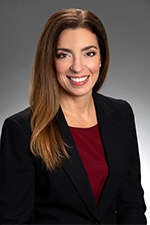 Barbara Fernandez
Partner in Charge of Miami Office
bfernandez@hinshawlaw.com
305-428-5031
View Bio
Barbara Fernandez focuses her litigation practice on consumer and class action litigation. She has extensive experience in defense of individual and …

Today, Hunstein took another unique—but favorable—turn for the debt collection industry. The Eleventh Circuit Court of appeals issued an order vacating its last opinion in Hunstein vs. Preferred Collection & Management Services, Inc, and ordered the case to be reheard en banc. More ›

In a special edition of our Consumer Law Hinsights newsletter, we cover the U.S. Supreme Court decision in TransUnion LLC v. Ramirez that was announced last Friday. The Court held "no concrete harm, no standing" in a significant check on federal consumer class actions. Read our analysis.

We now have a split among federal circuits regarding the definition of an automatic telephone dialing system (ATDS), under the Telephone Consumer Protection Act (TCPA), which limits automated calls and text messages. What constitutes an ATDS has been debated both by the FCC and courts for quite some time. In 2008 and 2015, the FCC found that all predictive dialers were automated telephone dialing systems under the TCPA. In Marks v. Crunch San Diego in 2018, the Ninth Circuit, held that the TCPA applies to devices with the capacity to automatically dial telephone numbers from a stored list or devices that dial telephone numbers produced from a random or sequential number generator. Now, in Glasser v. Hilton Grand Vacations and Gadelhak v. AT&T Services, Inc., the Eleventh and Seventh Circuits have taken the opposite approach and found that an ATDS only includes equipment that dials randomly or sequentially. More ›

On Thursday, as we anticipated in a previous blog post, the House of Representatives voted along party lines to pass the Financial CHOICE ACT ("FCA"), which would repeal Dodd-Frank and strip the CFPB of its authority.

The debate leading up to the vote also appeared to divide sharply along partisan lines, with Republicans urging their colleagues to vote for the Bill, and Democrats insisting that it was the "Wrong Choice" for Americans. Despite their differing opinions, representatives from all parties appeared to articulate the same goal: putting Main Street America ahead of Wall Street.

Supporters of the FCA contend that the purported benefits of Dodd-Frank have never materialized. They argue that due to Dodd-Frank’s excessive and expensive regulatory burdens, small banks and businesses have failed, while big banks have continued to thrive. Imposing the same regulations on every financial institution, they say, has strangled small community banks, and forced many to shut down. This problem triggered another major concern of the bill's supporters, namely an alleged lack of choice of financial products and the increased cost of these same products. More ›

What does the United States Supreme Court's decision issued earlier this week in Midland Funding, LLC v. Johnson mean for debt collectors? It means that debt collectors may file proofs of claim in a debtor's bankruptcy on time-barred debt without risk of violating the Fair Debt Collection Practices Act (FDCPA). In Johnson, a debt collector filed a proof of claim in bankruptcy court for a debt that was outside the six year statute of limitations, the bankruptcy court dismissed the claim as time-barred, and the debtor filed a separate, subsequent lawsuit arguing that the claim was misleading in violation of the FDCPA. The Eleventh Circuit agreed concluding that filing proofs of claim on time-barred debt amounted to false and misleading conduct. More ›

Selling a Car, Texting and the TCPA

After a car dealership (allegedly) texted a person who listed a car for sale on Craiglist, the would be seller filed a class action suit against the dealer claiming the texts were unsolicited, made without consent, and violated the Telephone Consumer Protection Act (TCPA).

The Florida federal court, in light of the Supreme Court’s recent decision in Spokeo, Inc. v. Robins, 136 S. Ct. 1540 (2016) ordered briefing on whether texting created standing for the Craiglist seller to sue. On review, the federal court concluded receiving prohibited text messages and calls amount to sufficiently concrete and particularized harm. The court acknowledged other cases from around the country in which courts held that violations of the TCPA alone do not create injury for standing to sue but disagreed with this analysis.  Instead, just the unsolicited telephone contact was the injury and any analysis of how the person was contacted does not matter for standing.  With ongoing disagreement among courts throughout the country on what constitutes an injury sufficient to bring suit in federal court, expect rulings to continue to come down on both sides of the issue until the appellate courts provide further guidance.

A debt collector seeking to collect on a GAP credit card debt placed 49 telephone calls over the course of 18 days. The cardholder filed suit, arguing the calls constituted harassment under the Fair Debt Collection Practices Act (FDCPA). Specifically, the cardholder stated that he had to stop what he was doing every time the phone rang, which not only disrupted and distracted him from his daily activities, but also caused frustration and anxiety.

A California federal court disagreed, finding the call frequency did not constitute harassment under the FDCPA because the debt collector waited at least 90 minutes between each call, did not contact the cardholder more than five times in a single day, and never left any voicemails. The court concluded the volume of calls resulted from the collector's inability to reach the cardholder, and that the number of attempts were legitimate and reasonable in light of the collector's unsuccessful efforts to reach the cardholder. Download a copy of the decision issued in Hinderstein v. Advanced Call Center Technologies, et al., Case No. CV-15-10017-DTB (C.D.Cal. Feb. 27, 2017)